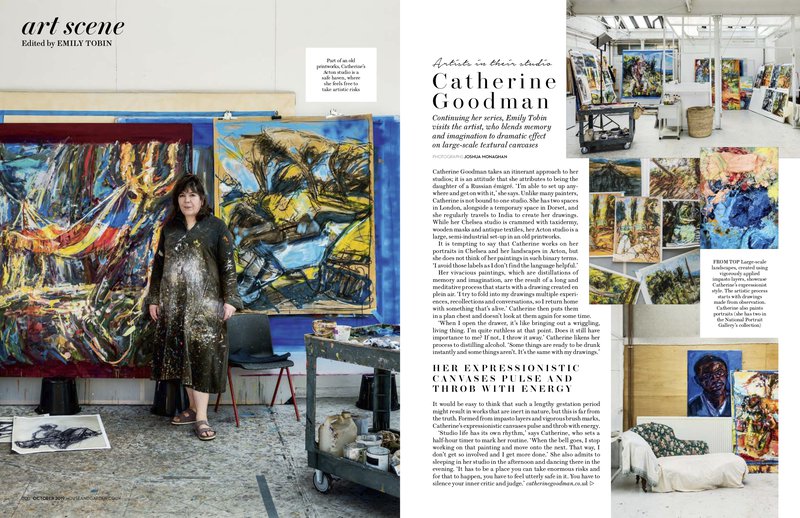 Continuing her series, Emily Tobin visits the artist, who blends memory and imagination to dramatic effect on large-scale textural canvases.

Catherine Goodman takes an itinerant approach to her studios; it is an attitude that she attributes to being a Russian émigré. 'I'm able to set up anywhere and get on with it,' she says . Unlike Manu painters, Catherine is not bound to one studio. She has two spaces in London, alongside a temporary space in Somerset, and she regularly travels to India to create her drawings. While her Chelsea studio is crammed with taxidermy, wooden masks and antiques textiles, her Ac ton studio is a large, semi-industrial set up in an old print-works.

It is tempting to say that Catherine works on her portraits in Chelsea and her landscapes in Acton, but she does not think of her paintings in such binary terms. 'I avoid those labels as I don't find the language helpful.'

Her vivacious paintings, which are distillations of memory and imagination, are the result of a long and meditative process that starts with a drawing created en plain air. 'I try to fold into my drawings multiple experiences, recollections and conversations, so I return home with something that's alive.' Catherine then puts them in a p[lan chest and doesn't look at them again for some time.

'When I open the drawer, it's like bringing out a wriggling, living thing. I'm quite ruthless at that point. Does it still have importance to me? If not, I throw it away.' Catherine likens her process to distilling alcohol. 'Some things are ready to be drunk instantly and some things aren't. It's the same with why drawings.' It would be easy to think that such a lengthy gestation period might result in works that are inert in nature, but this is far from the truth. Formed from impasto layers and vigorous brush marks, Catherine's expressionistic canvases pulse and throb with energy.

'Studio life has its own rhythm,' says Catherine, who sets a half-hour timer to mark her routine. 'When the bell goes, I stop working on that painting and move onto the next. That way, I don't get so involved and I get more done.' She also admits to stepping in her studio in the afternoon and dancing there in the evening. 'It has to be a place you can take enormous risks and for that to happen, you have to feel utterly safe in it. You have to silence your inner critic and judge.'