Catherine Goodman’s wonderfully bold, vivacious and enigmatic landscapes are distillations of memory and of imagination. An inveterate traveller, a teacher, film buff and a voracious reader, Goodman’s influences range from Rembrandt to Rilke, from Frans Hals to Ted Hughes, from Titian to Tarkovsky. Most of the subjects in this exhibition are the landscapes she returns to again and again—a farm in Italy, a village in India and a house in Scotland. ‘It takes time to build a relationship with a place, just as it does with a person,’ she says. ‘Places have strong personalities and every room, every view is as personal as a portrait.’

During a friendship that’s lasted over three decades, Goodman and I have travelled to many places including India, Bhutan, Spain, Scotland, Italy and Greece. She trails through airports and train stations with an assortment of exploding bags—some containing paints, pencils, a drawing board, others with clothes, some with both. On arrival, the first thing she does is stake out a place to set up her easel or board. For Goodman, work always comes before fun or sightseeing. She endures wasp stings and blazing sun, foregoes excursions and shopping trips in order to capture an idea on paper. She never paints large canvases en plein air but takes the drawings back to the studio (even more bags on the return journey, paint spattered clothes, rolls of finished work). ‘I would find it hard,’ she says, ‘to make meaningful big work in a landscape. It’s important to work in a studio from drawings because somehow the imaginative life has more free rein.’

The preparatory drawings, in charcoal, gouache, pencil, become ‘the armature or the scaffold’ of every piece of work. For over thirty years, Goodman has drawn every single day. ‘Drawings hold the smells and the bones, memories, feelings and the structure of everything I do. If I lost my drawings I wouldn’t be able to make the paintings. A photograph won’t do. However good a photograph is, it gives you one rather than layers of memory.’

Goodman keeps her drawings in an old chest or in piles. Her Chelsea studio is a riot of objects, paint tubes, brushes, rags and partially worked up canvases. In one corner there is a bed, in another there is her friend Lucian Freud’s old easel. Her paint encrusted palette has become three dimensional, sculptural. There are boxes of spent oil paint. Indian masks, souvenirs from foreign trips and drawings are pinned to the walls. Rifling through a selection of pastels she explains how one of the large oils in the exhibition, a hammock hanging in an Italian wood, was the result of many hours of preparatory sketches. The glade of trees was a ‘hang out’ for her students who liked to talk and smoke there after classes. It was the hammock’s ‘shroud-like yellow rope in a dark wood’ that caught Goodman’s interest and she returned at different times of the day over the next fortnight to capture the changing light and atmosphere. ‘Something I have learned from the great paintings at The National Gallery is that a Poussin or a Rembrandt were not made quickly,’ she says. ‘There’s a sense of the time it takes to capture those feelings and pin them down. It’s a slow release so you don’t get everything in the first shot, you need to stay with them.’ Only a fraction of her drawings become paintings but there was something about the hammock, the trees around it and the colours that had her ‘chomping’. 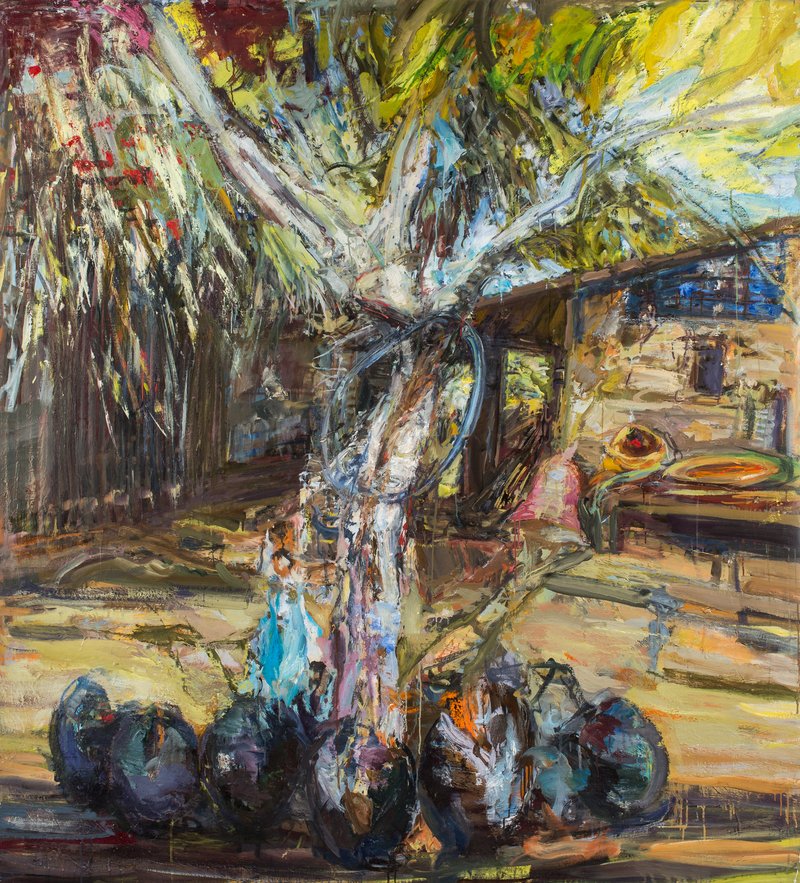 Like the other landscapes in this exhibition, the hammock picture is uninhabited by human forms; the students have left, mere ghosts in her memory. Another work, White Tree, inspired by residency in India, is, she says, all about the women who used to congregate in the village centre and talk. In the finished painting however, the women have vanished leaving only their water pots, a series of interlocking circles in the foreground. A painting of a fragile palapa in Italy, shelter from a burning sun, is also unpeopled. So too is a picture of an abandoned glass house and even the huge ornate mirror carries no reflections. This air of desolation is reflected in the title of the exhibition taken from a line in a poem by Rilke; ‘The last house of this village stands as alone as if it were the last house in the world.’ Partly because of the absence of human life but also because so many of the man-made structures appear so desperately fragile, on the cusp of being dismantled by time and nature, the works are suffused with a strong sense of loneliness and temporality. I ask Goodman if these were the feelings, the atmosphere she was trying to convey. Used to her answering questions quickly, in articulate and thoughtful sentences, I’m surprised by the long hesitation. ‘I suppose that is how I encounter the world’, she says. ‘I am a quite untrusting person. This is partly coming from a refugee background because of my grandparents being immigrants and for the whole of my childhood I wondered if we were staying here or going back to Russia. Life felt very temporary.’ She continues to muse on the question of loneliness and how it affects her and her work. ‘I have an increasing sense of the fragility of things—maybe it’s my age or watching my parents dying but I’m more aware of mortality. It’s important to observe how transitory everything is. Painting is a way of keeping things which have been blown away.’

To many, these answers might be surprising; Goodman is hugely popular. She gives the impression of being grounded and utterly sure of her priorities. Her friendships span all generations and backgrounds. She champions individuals and causes, particularly those in need, with gentle ferocity. Unlike many painters, Goodman isn’t welded to one place or studio. She lives in Kensal but spends a significant amount of time with her parents, sisters, nieces and nephews at the family home in Kensington. Her main studio is in Chelsea but there are borrowed spaces in other parts of town. To many creative people, Goodman’s lifestyle would be distracting, possibly destabilising . ‘You have to construct an area of virtual simplicity even if your life isn’t at all simple,’ she says. ‘There is an austerity within a creative life as it is essentially a lonely furrow so you have to construct some kind of cave that others aren’t allowed into.’ Within the peripatetic existence, she uses the practice of drawing, prayer and meditation to anchor her creativity. ‘Being able to access the imaginative life is the hardest thing, particularly in this Metropolitan city. Meditation gives you a platform of silence that is a springboard for the day. Like getting in to the cold water. Austerity means that your imaginative life becomes more active.’

A proportion of Goodman’s week is spent in Shoreditch at the Royal Drawing School, an institution she co-founded with the Prince of Wales in 2000 in order to address the decline in observational drawing programmes at contemporary art schools. Although she has stepped back from the daily managing of the institution, she’s still its Artistic Director and an Academic Board Member. The amount of time she has dedicated to the school has come at a price. ‘I am sure that my painting career has suffered, I am sure I am seen as a teacher not an artist,’ she says. Nevertheless she also sees teaching as a kind of duty. ‘If you look at music and dance, teaching is something that is done by everyone—you would not have a great ballerina or pianist not teaching and something very odd has happened in art education where teaching is seen as something that ‘those who can’t do, teach’ rather than a responsibility to pass it on.’ She points out that the great tradition of one master handing on the baton to another has been broken. Frank Auerbach will be one of the last artists who can trace his artistic lineage back to Ingres via the teachings of Bomberg, Sickert and Degas. Goodman acknowledges more personal reasons for teaching. ‘I didn’t have a family so the Drawing School has been a replacement for children.’ Most people average between two and four children: Goodman has taught and nurtured over two thousand young people, many of whom are establishing successful careers in the art world. She also credits teaching with improving her practice. ‘I like explaining things and I like being challenged. Teaching is about clearly laying out your own feelings and thoughts and insights. I see it as an extension of drawing. I am not interested in showing people how to do something but am interested in showing how the world looks to me and to hear how it looks to them and to help them achieve that.’

Goodman was trained at London’s Camberwell School of Arts & Crafts, and at the Royal Academy Schools where she won the Royal Academy Gold Medal in 1987. Her painting of Antony Sutch won First Prize in the BP Portrait Award at the National Portrait Gallery (NPG) in 2002, following which the museum commissioned Catherine’s painting of Dame Cicely Saunders, for its collection. In 2014, the NPG gave her a solo exhibition, Portraits from Life, and at the same time, Colnaghi Fine Art showed Drawing from Veronese, a collection of works inspired by frequent visits to the National Gallery. 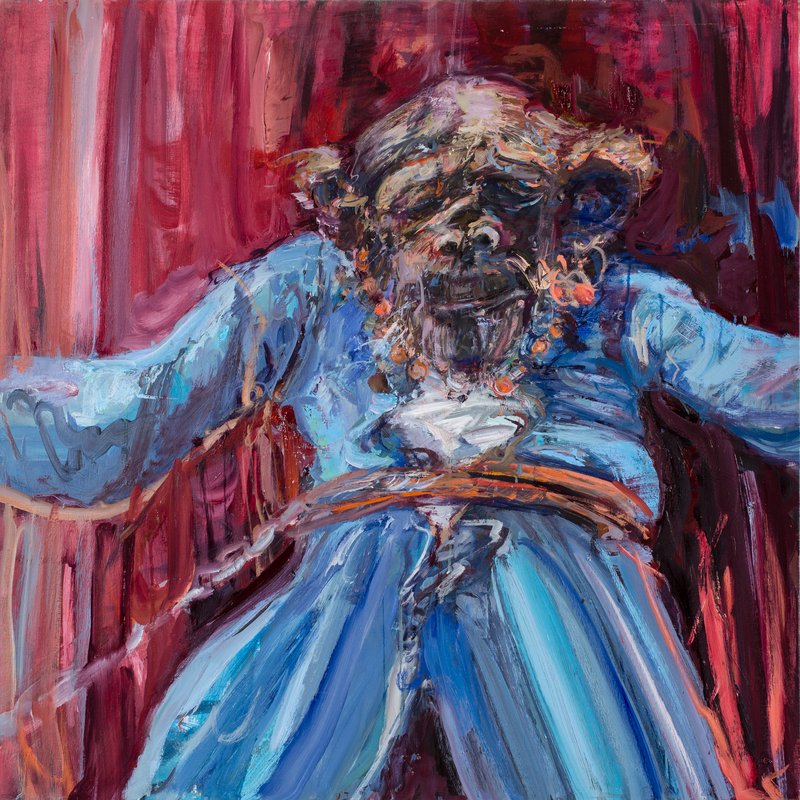 Though deeply serious about her work, friendships and family, Goodman’s tremendous sense of fun and mischief is shown with the two portraits in this exhibition inspired by favourite films from which she and students draw once a week: the child from Satyajit Ray’s Apu and the monkey from Arabian Nights. The latter, an impish and irrepressible character almost bounces out of the canvas. Who is it?, I ask. Goodman giggles and eventually reveals that it is a portrait of her mother. The only recognisable portrait in the exhibition, Wayfarer, of the soldier and writer Harry Parker, shimmers with movement. From some angles, Harry disappears and his form becomes a series of fleeting marks, brush strokes, dabs and flashes of vibrant colour to create an impressionistic likeness. Then you shift your gaze and he reappears. It is a portrait of a person but it is also a depiction of the shifting sands, the ebbs and flows of any human relationship.

Standing in her studio surrounded by unstretched canvases pinned to the wall, her bare feet in leather sandals, paint spattered clothes, a yellow smudge on her cheek, Goodman looks incredibly young, girlish almost. She has just returned from taking a group of students to Italy and is planning a similar teaching trip to Scotland. She talks about poetry, a transcriptionof a picture at the National Gallery, how she’s struggling with one portrait but is pleased by the progress of another. There’s a new Monday night meditation group and the students’ film night is starting again. Watching her, I can’t help thinking that for the title of the show I might have chosen another line from the same Rilke poem: ‘A place of transition’ is an apposite description of Goodman’s constantly evolving, dynamic and exciting world.