Catherine Goodman sometimes stays with me in New York.
I have a quiet guest room with high ceilings that looks out upon
a narrow garden. Its walls are mouldy with lichen, and at the

center, is an amateur mosaic of beach pebbles. 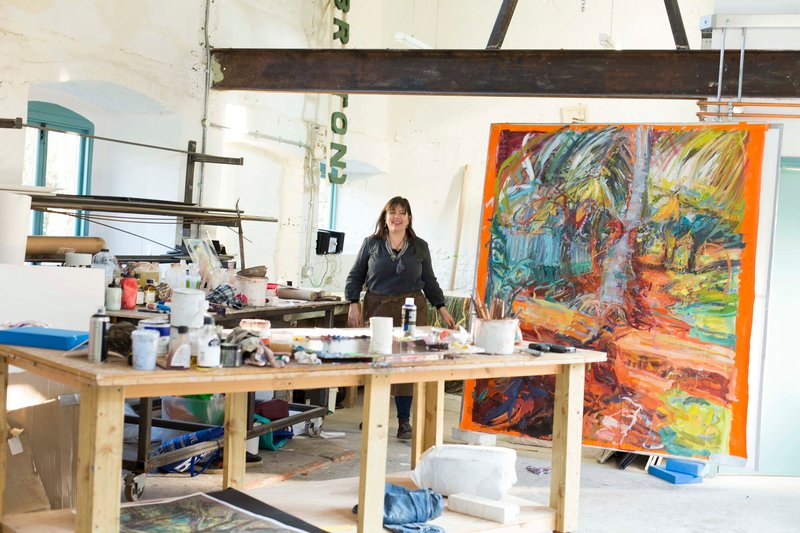 Catherine likes to sketch the garden from the window, or, on fine days, from a bench. Watching her work, I have understood that no space is prosaic to her, just as no face is unworthy of regard, in either sense.

Whatever Goodman’s subject—pregnant Eve, a blue monkey god (Hanuman), a landscape in Tuscany or the Himalayas—nothing she represents is static. Once she gave me a page from her sketchpad covered with wormy squiggles made with a Sharpie; it was, she explained, the view from a moving cab. She often draws from film, an exercise that requires extreme presence in the moment, like simultaneous interpretation. The spontaneity of her drawing contrasts with the much slower tempo—the adagio—of her painting, though her ideal, I think, isn’t so much to create something finished as to capture the pulse of a scene or a body beneath its surface—its impermanence. Those famously earthy layers of her impasto, Goodman’s signature, are fissured by translucent drips of what might be the ice melting everywhere on our planet. Its own solidity is deceptive, the work suggests, since all that is solid—flesh and mountains—must dissolve. This message ought to be grim, so why isn’t it? Because her work is an act of reverence, and it honours a principle mostly sneered at by the modern art world: that beauty consoles us for loss.

A true work of art harbours a mystery—the mystery of where it comes from, which shouldn’t be confused with its “provenance”. Art historical vocabulary is often like the conversation you have at a dinner party, with a blasé stranger who wants to establish what you do for a living, where you went to school, and how to place you—are you, or not, someone important? But if you have spent time with Goodman, who has friends in palaces and homeless shelters, you know that facile acquaintance doesn’t interest her. Her work engages with the beholder as it engages with her masters, like Titian, and her subjects, like Loic, on an intimate level at which we are all vulnerable. Simone Weil suggests the nature of Goodman’s vocation where she writes, “attention is the rarest and purest form of generosity.”

Loic is the portrait of a “profoundly disabled” man, Goodman told me, who lives in a group home. He is one of many marginal or wounded people (some wounds are grievous, others invisible) whom she has drawn and cared for over the years, including a beloved sister. Loic has never visited the house in Manali, an Indian hilltown where Goodman spends part of the year, but the painting transports him there, she told me, “because that’s where he is most alive to me.” It isn’t obvious that a canvas in her studio, an untitled nude, drowsing blissfully under an arbour, is actually an avatar of Sleeping Beauty. “She is the daughter of a poet friend,” Goodman told me, “a young girl who was touch-and-go in a coma after a terrible accident. I painted it urging the healing to happen, and it did.”

“There is a crack in everything,” Leonard Cohen writes, in a song that gave Goodman the show’s title,“that’s how the light gets in.” Cohen’s light is numinous—the contrail of a divinity—and so is Goodman’s. “Every heart to love will come,” Cohen sings, “but as a refugee.” There are many ways, Goodman knows, to lose everything, including oneself. She is the second born of five sisters who, on their mother’s side, are the daughters of a Russian émigrée. A family’s trauma of dispossession rarely ends with one generation, or with a new life elsewhere—it gets passed on. Goodman’s heritage seems to have made her wary of a settled existence, and perhaps of investing her love in the tangible. She sets little store in material comforts. Her various studios, some borrowed, resemble campsites. Art is manual labour, and much of Goodman’s is performed out of doors. She has painted luxurious interiors (and grew up in one, paradoxically), but the images of refuge in her work are more often huts or palapas, pastoral shelters where farmers rest. Her sense of place is fraught by her knowledge of displacement, and coloured by her sorrow for the displaced.

Like a nomad, Goodman returns annually to a few oases: the hills around Volterra, the Scottish highlands, the Himalayas. (Seekers of detachment gravitate to heights). Wanderlust is akin to carnal lust by virtue of a common trait that also describes Goodman’s practice: they simultaneously dissolve one’s bearings while refreshing one’s keenness of sensation. Her work celebrates sacred animals—the cat, the monkey—hinting, perhaps, at her own pantheism. Nor is she shy of erotic scenes, even when they may trouble moralists. Dark Diana pays homage to a detail from the master’s Diana and Acteon—the goddess snuggled in the arms of her black handmaiden—which, she told me, “is one of my favorite bits of painting anywhere, so sexy and tender.” Elliebellie, the portrait of her youngest niece, a prepubescent girl, half-naked, with thighs splayed, was, she said, inspired by a discussion of Balthus. Preening Adam, arching his back to flaunt his buttocks, Owl and the Pussycat, and even dreamy, massive Loic, are, in different ways, reveries of abandon.

The risks and pleasures of abandon, however, aren’t reserved for Goodman’s subjects. On first impression, her paintings are an enigma of sensual chaos. Their blaze disorients you as the sun does when you take off a blindfold. I imagine that a preverbal child must blink at the world this way: she can’t read it yet. To know what you are seeing is to possess a set of definitions—a visual grammar—that fits your perception to a fixed idea. When I look at my garden, I see what I expect to; I can’t unsee the familiar—that’s Goodman’s great gift.

Perspective is a powerful convention. Goodman paints space in perspective, and represents objects figuratively, though neither with strict fidelity to anything but her own vision. In doing so, she cultivates your untutored sight—that jolt of puzzlement you felt before the world was recognisable. There is no pedantry to this process, yet it is still a teaching, in the eastern sense: a disruption of illusions about what is real. And even when your eyes adjust to the density of her brushstrokes, and the brain resolves your vertigo, the images on the canvas never fully stabilise. The joy is in surrendering to their unstill life.

Judith Thurman is the author of two prize-winning biographies, of Isak Dinesen and Colette, and of a collection of her essays for The New Yorker, where she has been a Staff Writer for twenty years. Her criticism focuses on literary and visual culture.